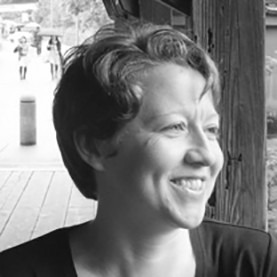 She uses computer software to work sketches and photos into graphic design. Computer graphic skills were first acquired in the 1990s at a Japanese business school. Graphics work was featured on Japanese TV and she exhibited in Tokyo.

After receiving a BA from the University of Cambridge, UK (Modern and Medieval Languages) she worked in education, editing learning media along with teaching at universities, schools and companies. The visual arts were central to two dissertations: an MA in European Literature (University of Sussex) and an MSc in Digital Education (University of Edinburgh).

Patterns, tessellations, knots and geometry influence artwork. Textile design seen on travels in Russia, Azerbaijan, Georgia and Uzbekistan brought new ideas of colour and design. In her late teens music lessons at the London College of Music brought the bonus opportunity to browse fabrics at Liberty’s of London next door. Fabric and surface design from Japan, Asia and Africa were later sources of stimulation. With a foreign languages background visually different writing systems were always of interest. Family members proficient with knitting, lacemaking and tatting, as well as early computer technology, provided various experiences of building visual structures. Everyday life in Japan allows interesting experiences of colour and design in contexts spanning the elegantly traditional to the zany playful and brashly commercial.

This website uses cookies to improve your experience while you navigate through the website. Out of these cookies, the cookies that are categorized as necessary are stored on your browser as they are essential for the working of basic functionalities of the website. We also use third-party cookies that help us analyze and understand how you use this website. These cookies will be stored in your browser only with your consent. You also have the option to opt-out of these cookies. But opting out of some of these cookies may have an effect on your browsing experience.
Necessary Always Enabled
This is an necessary category.
Non Necessary
This is an non-necessary category.
Save & Accept